It was a chilly Mumbai night
People coming home from work
Dinner plans, Take Out- the night was abuzz
No one least expected it to happen
Until it did....


...Was the real reaction when I first ravenously bit into my KFC Fiery Grilled Chicken piece.

A tiring train journey, shopping and flat tyre later demanded take out and an excuse to try the New KFC variant. Much advertising later, I stepped into the KFC outlet on a chilly Thursday evening carrying my Golden Ticket. No, not the Charlie and the Chocolate factory kind; but couriered one by IndiBlogger worth INR 500
Ka-Ching! 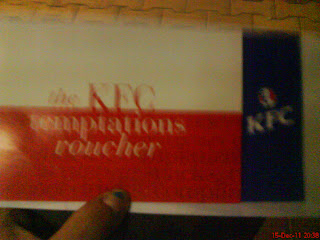 So I went for the kill.

Our order: 12 pieces of KFC Fiery Grilled Chicken
Taste: Spicy hot, ready to run to the nearest water source.
VFM: Try once. Not really VFM like the 2 piece chicken.

Damages: Starting INR 125 onwards, for 12 piece bucket ~ INR 625
Early Minus: Had to wait for 15 minutes for my order, even though

Warm, seasoned with herbs and spices (secret of course) and grilled with a hot chilly based sauce which lingers not only on your senses but also on your bare tongue much much later after eating !
All I needed was a tank of water to wash it down or a KFC Virgin Mojito on the rocks by the truck loads.

So if you are into the chillirific chicken, go for it. Not for the faint hearted.
Posted by Gauri at 10:09 AM

Spit it out already!