Years after Subway & KFC opened up in Bangalore, America's leading Mexican inspired quick service restaurant chain Taco Bell has first opened up in Mantri Square Mall in Bangalore. Mantri Square is said to be the largest mall in India located at Malleshwaram with 1.3 million sq. ft. home to over 250 outlets, a six-screen multiplex operated by Inox Cinemas, five separate Reliance based outlets, a bowling alley by Amoeba and has a parking area sufficient for 2000 cars.

So on my umpteenth trip to Bangalore earlier this year, my cousin and I trotted into Taco Bell. Initially it seemed deserted in the afternoon, the shopping crowd joined later in the evening. Welcomed with a blast of purple everywhere we ordered the basics : 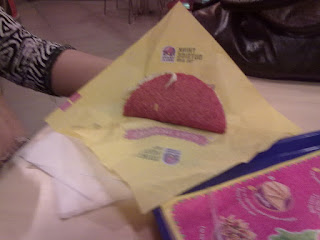 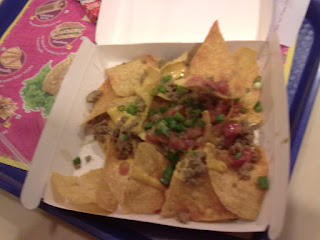 Topped Nachos (Non Veg)
After waiting for our token to get our order we sat in the lower level seating area.
Review:
Topped Nachos were great, cheesy enough with enough minced meat toppings. Volcano Taco is crunchy with really meager amounts of chicken an more of the lettuce but good for a small snack.
Disappointment was greeted with the Grilled Stuft Burrito since it was too tangy and I had to forcibly wash it down with the Pepsi. Quesadilla was alright and enjoyable.


P.S. Check out the little anecdotes on the freebies


The Value for Money part is that of the Freefill. Concept is that you pay for one serving of Pepsi and thereafter can voluntarily get unlimited amounts of refills of Pepsi or any other soft drink or water until you preserve your cup.


I would give the ratings as follows:


I spy:
Right before you place your order there is an illuminated sign board displaying all the delicacies offered and the right pronunciation to avoid any faux pas
Example: Quesadilla is pronunced: kay-sah-DEE-yah and not que-sa-DIL-la

Visit once, its a good experience and not too heavy on the pocket.

Spit it out already!